It's been quite a while since I posted an update and wanted to fill everyone in on the progress of Reaver Sword & Sorcery RPG. To say the least it's been quite a year. I attended Origins Game Fair in October of 2021 and ran several sessions of Reaver; at that time the original version of the Quickstart was complete and ready to be released. I was blessed with some excellent players who offered some very important feedback on the game mechanics and I took this to heart. Keeping their feedback in mind, I returned home and proceeded running my home play test group and it was then that I realized that the players in my group (who were familiar with the game) were having the same issues that the players at Origins were having—basically that having a non-unified system of rules was confusing. So, at about the end of October or maybe early November of 2021 I decided that I would rewrite the core mechanics and try to streamline the system.

This amounted to me eschewing one of my original goals—to make a familiar game—and also pushing the project way out of my initial release window. I was fine with that, I'm a one-person-show for the most part and didn't feel beholden to a schedule, and do believe that this was the correct decision. However, I also realize that many of you were hoping to see it sooner and all I can say is that I apologize for the lateness, but rest assured that you are getting a better game!

I spoke a bit about the Quickstart (and other projects) on Nerd's RPG Variety Cast, check it out!
Episode 444 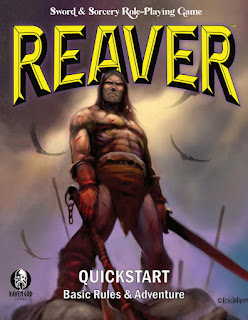 What Has Changed?
Well, I went through several iterations of rules, testing constantly, but in the end most of the D&D-style combat mechanics have been stripped out (no more d20 attack rolls against a target AC) and everything operates off of a die chain system. Most rolls are made by the players—you roll Defense to avoid attacks and Adversary abilities modify your rolls. If you've played The Black Hack or the original Symbaroum, you'll have the idea. Otherwise, there've been any number of minor tweaks to the rules and text, things like renaming to Attributes to better reflect the genre, making conditions easier to use, and so on.

Where Does it Stand?
The 90-page Quickstart is being proofed now and I'll have to do some clean-up resulting from that and finalize the page numbers and hyperlinks in the PDF. Once those are completed, I'll be posting the PDF as PWYW, i.e. free, and getting a print option up soon afterwards (this will be softcover for a small price).

In the Quickstart, you'll be getting a hefty amount of the core rule system, spells, a sandbox-style adventure with two adventure hooks and months-worth of gaming possible (I personally ran the material for 4-5 months playing every other week). Of course, you can pick one of the hooks and run it as a one-shot without issue.

Setting?
The implied setting of Reaver is called The Sagas of Cennor and is more grit than gonzo, more dark fantasy than weird—its much more akin to a Bran Mak Morn-style world than an Elric world. It's the kind of Sword & Sorcery that is a simple side-step from historical adventure fiction, where protagonists can be big heroes, so long as their luck holds, but the Raven God always withdraws his favor eventually.