This week we’re taking a look at the old staple of character classes, the sword-wielders, the shield-breakers, the slayers—The Fighter! Fighters are ubiquitous in RPGs, having first appeared in the original role-playing game, and they fill the important role of dealing damage, laying foes low, and protecting their fellow party members. In REAVER, Fighters have abilities that represent their masterful battle skills, they are technical warriors, well-versed with all weapons and able to employ all armors—an important ability, because in REAVER, armor grants Damage Reduction and can help keep a character alive.

To explore the Fighter class we are going to try something a bit more historically-oriented and experiment with the protagonist from Bernard Cornwell’s excellent series, The Saxon Tales. I highly recommend this series (and all of Cornwell’s work honestly) to anyone interested in historical fiction. The Saxon Tales take place in the time of Alfred the Great and follow the life and exploits of Uhtred, son of Uhtred, born a Saxon but raised a Dane, as he seeks to reclaim his lost birthright, the lands of Bebbanburg. I’m choosing to create a character from historical fiction to demonstrate that REAVER is malleable enough to handle such characters and their stories, one of the stated goals of the game.
In addition to Uhtred’s own prowess and experience, he gathers about him a number of loyal followers throughout the course of the books. In REAVER, these henchmen would be represented by Companions, sworn followers who have pledged their service to the PC at any time during their career—not just when they are higher level and no special abilities necessary. Instead, acquiring companions is entirely left to the PC’s actions, roleplaying, and the narrative. 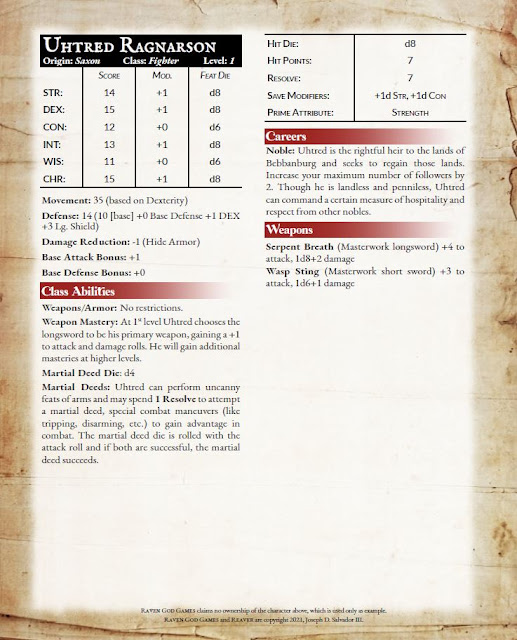 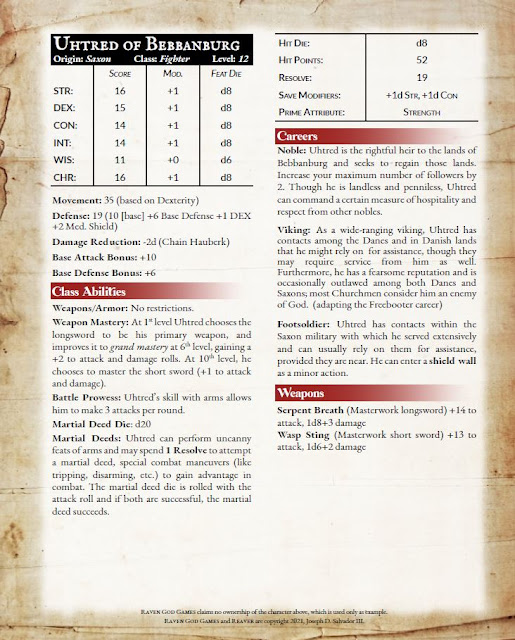 We've moved out of the year of Doom and its time to apprise you all of what's been going on at RGG!

Regardless of 2020's troubles, I was able to work on Reaver regularly and have a number playtest sessions completed and ongoing. Those sessions revealed certain problems and inconsistencies that led to some moderate rewrites, which also let me clean the rules up quite a bit.

What's Next for Reaver?

Eldritch Tales has been on the back-burner since last year, but I do have issue #2 of The Eldritch Inquirer partially in layout and in the works. I plan to release this after the Reaver Quickstart. The issue will include support for pulp adventure games and an exciting, pulp scenario written by John Large of Red Dice Diaries!

Posted by Joe Salvador at 4:08 PM No comments: