After a bit of a holiday hiatus, I'd like to let everyone know what's going on at Raven God Games! First, I'd like to thank everyone who has contacted me or otherwise shown support for Eldritch Tales. You inspire me to "get it right" and make a game that will be appreciated by the community. Many thanks, and if anyone has comments, questions or ideas, feel free to drop me a line!

Work is continuing on Eldritch Tales, never fear. I was able to get a few playtests in over the holiday and also received some great feedback from some from Pete Spahn (Small Niche Games, WWII: Operation WhiteBox) and others. A few of you have mentioned playtesting and I have not forgotten you. Once I have a new draft available I will be looking for a select few to give the game a spin. I'm also slowly grinding away at some adventure modules for use with playtests and further development.

I have had several questions asking about random monster creation charts, and other random charts. I like the idea and have been considering how to approach it. I don't want to force them into the book, so these sorts of things may appear in the appendices or perhaps as separate downloads. How would you guys and gals use them? Would you rather they were loose?

In other news, I have rewritten a short viking-themed adventure scenario for use with Swords and Wizardry: WhiteBox. The adventure, Beyond the Ice-Fall, first appeared in AFS Magazine #6 and was written for the Astonishing Swordsmen and Sorcerers of Hyperborea rules. I have expanded and revamped the setting and story, created new maps, and changed the relevant rules to WhiteBox. Regardless, it should work well enough for any OSR game. Beyond the Ice-Fall is a location-based adventure, a fjord with some viking villages, a dangerous wilderness, and primarily a icy dungeon that poses its own hazards. It will feature a cover piece and a full page interior illustration by Del Teigeler, with cartography and additional art by my own hand. My hope is that this module (and perhaps some other small projects) will help foot the bill for Eldritch Tales. I've not quite finished the maps yet, but layout and art are largely complete. So, it should be released within the next month or so. In the meantime, check out Del's fantastic cover art! 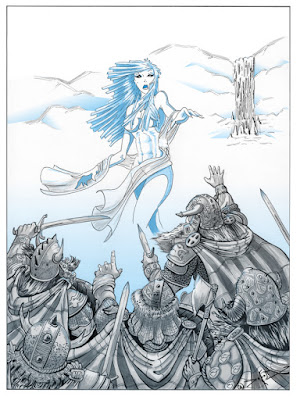