I am happy to announce that we have just broke 100 PDF copies of Eldritch Tales sold! In thanks for this early support, RGG will be offering a discount to those who buy the PDF version of Eldritch Tales before print release day! That day is still a few weeks out, so there is plenty of time to jump in!

Because we can't effectively and efficiently personalize the discount, we'll only be offering this discount on Hardcovers purchased through RPG Now/DriveThruRPG. Here's how it will work:
All early supporters who bought the Eldritch Tales PDF before PoD release will receive an email from Raven God Games, via RPG Now, with a link to the discounted hardcover. The discount will be for the full price of the PDF ($9.99), allowing you to purchase the Hardcover for $35!

In comparison to the Print+PDF bundle, this Early Support Discount will save you $3, and net you the PDF for free!

Remember, this offer is only good on PDFs purchased before print release, so if you are  planning to pick up the print book, go grab the PDF at RPGNow!

PLEASE NOTE: This is very important, in order for you to receive the email discount, you have to allow Raven God Games to send you emails. You can make sure you're signed up on your Account page at RPG Now; under "Notifications" choose "Select how I wish to be contacted by publishers." On the next page, find RGG and add us to your email list!

Thanks for all of your support! 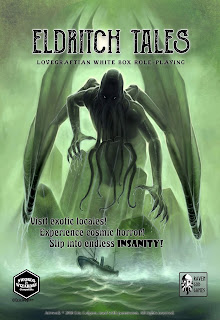 Posted by Joe Salvador at 9:45 PM No comments:

PDF Update and Other News

So, today I uploaded "Version 2" of the Eldritch Tales PDF to RPG Now! We've corrected and fixed all errors we could find, from typos to layout inconsistencies. I also dropped a new landscape character sheet into the downloads, this one was made by Tom Novosel and matches his excellent layout. Its very clean, easy to read and has an Art Deco feel! 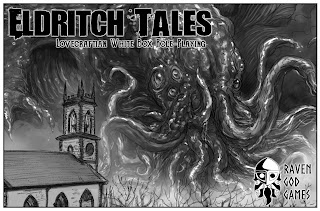 Since release, Eldritch Tales has been featured on Yog-Sothoth.com and has received great feedback all-around! Mark Siefert, who playtested ET and has been a long time supporter of the project, has created an Eldritch Tales Fan Community over on G+. I had this on my own to-do list, but Mark actually beat me to it, so rather than having two communities, Mark's ETFC will be the official place to find ET news. Be sure to join up and take part in our growing discussions, we'd all love to hear your questions, input and comments on things Lovecraftian! Thanks to Mark for setting this up!

Next, Jonathan Hicks has written a very nice review of Eldritch Tales. Be sure to stop over at his blog, Farsight Blogger, and check it out! Thanks for the review, Jonathan!

Around the time that Eldritch Tales went live, Rafael Beltrame contacted me and asked to do a mini-interview for his Brazilian blog, Modulos RPG, in which he reviews and discusses older editions of D&D and OSR games. The link will take you to the interview post, but you can find a link there for the English translation. Thanks for your interest in ET, Rafael, I had a great time answering your questions!

And finally, something that only recently came to my attention. Skinner Games, dropped an actual play video of their play through of an earlier version of Eldritch Tales. Due to their tight schedule, Skinner Games wasn't able to get any sessions in before the playtest closed, but they were still enthusiastic about getting a game in before live release. They actually streamed the game back in May, but I didn't learn about it until late August. Shame on me. Like I said, this is an earlier version of the rules and not everything you see here carried over to the final product. Check out the video on YouTube! Many thanks to the Skinner Games team!
Posted by Joe Salvador at 7:42 AM No comments: