I'm happy to inform everyone that there are some fine, third-party products for Eldritch Tales: Lovecraftian White Box Role-Playing! Some of these have been out for a while now and have gone completely under my radar, so I'll apologize for the lateness of this!

Parts Per Million has released a handful of quick scenarios, available singly or in a nice Eldritch Tales Investigation Bundle, as well as OSR Cosmic Horror Solo Role-playing, a guide for running Eldritch Tales without a referee! PPM has a ton of products available on DTRPG, many of them solo-play-oriented.

Azukail Games has released a short scenario called Spawn of the Temple and an assortment of magic items gathered in A Baker's Dozen of Sorcerous Items. Azukail also publishes 3rd party products for a number of different games systems, as well as stock art and other publisher resources.

Be sure to slither over to DriveThruRPG and support these great creators! 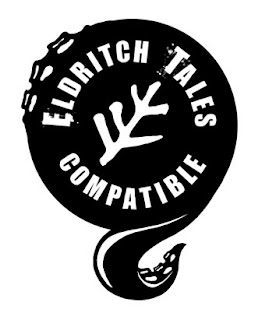