In all of Sword & Sorcery fiction, one character stands out above all others and it only seems fitting to start with ... the Barbarian! The Barbarian's prominence and popularity stems from the creations of Robert E. Howard…Conan, Kull, and others… as well as Lieber’s Fafhrd and from the numerous pastiche characters based on them. Barbarians appeared early in the history of RPGs, as early as 1982, when Gary Gygax penned the Barbarian as a fighter sub-class in Dragon Magazine, but from those early origins, the class has evolved (within Dungeons and Dragons) from a wilderness warrior who detests magic to a raging damage dealer who might employ magical effects.


In REAVER, the Barbarian not a rage-oriented character, that place is left for the Berserker, and certainly has no magical abilities. Instead, Barbarians are warrior tribesmen who live close to the wild. They are excellent combatants, but while a Fighter relies on skill and technique, Barbarians focus on delivering powerful blows and following through when they fell an enemy. They are skilled in survival, have an uncanny sense for danger, and are comfortable fighting unarmored. Designed in this manner, the Class might easily represent a Conan-like hero, a shirtless Celt striving against Roman legionaries, or a bloodthirsty savage in a dark fantasy setting.
Let's borrow a barbarian hero from fiction and recreate them as a REAVER character, and best to start with character everyone knows - Brule the Spear-Slayer! (Did you think is going to "Conan?)
Howard didn't tell us much about Brule's backstory, but we can extrapolate a few things. He is a Barbarian Pict from the Pictish Isles; by his own words, he is very stealthy; he is sometimes an emissary and sometimes a soldier; he is as skilled at mounted combat as he is afoot. What is presented below is a draft version of the Character Class and is subject to change.
(*updated 3/28/21) 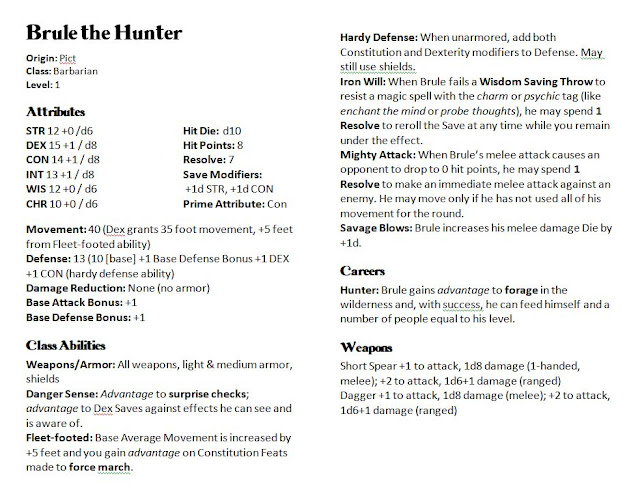 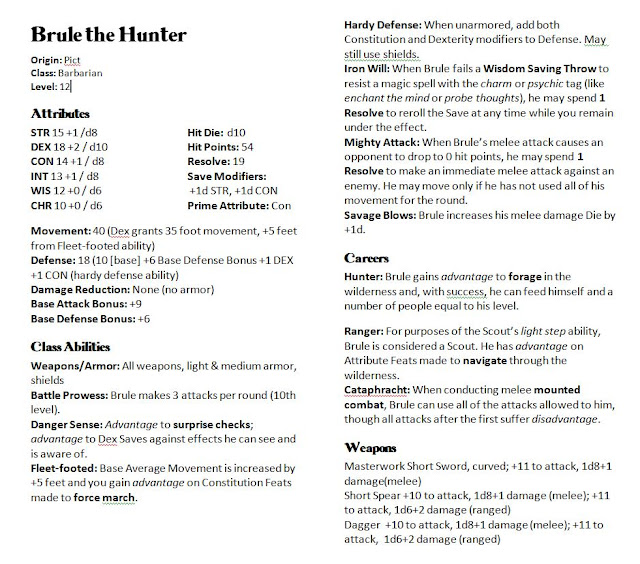 *The author claims no rights on the Brule character and is only using it as an example.
Posted by Joe Salvador at 3:57 PM No comments: