Raven God Games is proud to announce that, after more than two years of development, Eldritch Tales: Lovecraftian White Box Role-Playing has released on this auspicious day, the birthday of Howard Phillips Lovecraft himself. Eldritch Tales brings Mythos horror to the OSR and OSR gaming into the 1920s!

From the product description:
"Aeons before man arose from the primordial mire, ancient creatures descended from the stars or stepped through dimensional passages to inhabit the Earth. Whilst many of these Old Ones have since passed into inactivity, the secrets they carried with them have been shared with man and now terrible cults haunt the fringes of modern society. These ancient terrors thus still menace mankind and, if the prophecies are to be believed, the Old Ones shall return to reign again over the Earth!


Eldritch Tales: Lovecraftian White Box Role-Playing in an OSR rule set with its roots in the Original version of the world's favorite RPG, but instead of exploring musty dungeons, characters in Eldritch Tales investigate Mythos horrors in the 1920s! The setting and background are based on the cosmic horror tales of Howard Phillips Lovecraft and other members of his writing circle.

Within the pages of Eldritch Tales you will find four character classes representing many classic pulp archetypes, occupations, rules for insanity, spells, monsters, esoteric tomes, artifacts, and setting material, as well as advice on using Eldritch Tales with other White Box games. This game is compatible with Swords & Wizardry White Box and other OSR games." 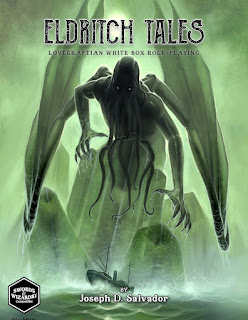